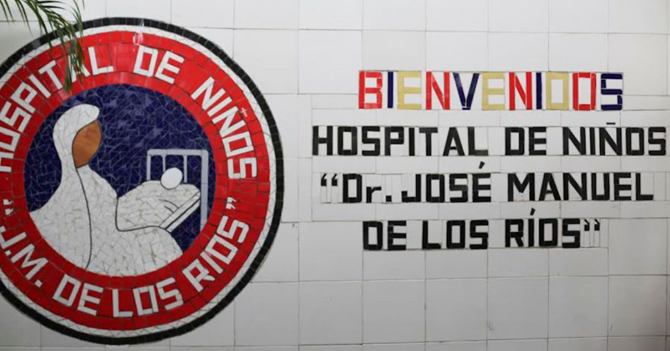 Everyone’s talking about innocents today, so we want to introduce you to the children in the fifth floor of the J.M. de los Ríos Children’s Hospital, Caracas, Venezuela.

They’re the definition of innocence. They should be at school learning or in the park playing, but instead they’re in that hospital, in the poorest conditions imaginable, fighting an endless battle for their lives.

In their innocence, they couldn’t possibly grasp the significance of why they’re there. They lack the necessary maturity to understand that the resources they need in order to heal, are lost in some corrupt bureaucrat’s bank account in Andorra or Switzerland. But above all, in their tender age, they’re unable to see the suffering and helplessness behind every one of their parents’ tears.

They’re so young that they can’t realize that they’re innocent victims in a war not of their making or choice. Victims of a political system where they can’t even vote. Victims of a government that won’t even guarantee them their right to health, or any of their other human rights.

Today is All Innocents Day, and they are innocent. But we want to talk about the Criminals.

Not the Criminals responsible for the serious situation these children are experiencing, no. Today, All Innocents Day, we don’t want to point at you. You don’t deserve it today. We have the whole year to talk about you. And we’ll continue to do so, make no mistake.

Criminals such as Fundación Prepara Familia.

They’re guilty of finding resources where there aren’t any, of helping the innocent children of the J.M. de los Ríos Hospital and bring these patients -and their families- the smiles and hope that the system, the environment, the country deny them.

They’re guilty of the most deplorable crime of appreciating the value of each of those bolívares or dollars, in the certainty that they don’t come from shady contracts, from broken promises or some disgraceful crime, but from hard work and a helping hand.

They’re also guilty of respecting these children, of treating them with dignity and believing that a better future for them is possible. Guilty of fighting for them, for their wellbeing, for restoring their violated rights.

These are the criminals we want to point at today, All Innocents Day.

We encourage you to join them or any other institution currently fighting for a better society, because this is a contest of endurance, and the challenge is colossal. The more hands, the better.

Do you dare to help them? Do you dare to be a criminal, like them? Are you bold enough walk the walk, instead of talking the talk without giving anything? Would you work with them or with any of the other criminals who fight with tooth and nail for the Venezuela we want to be?

You can make a donation here so that you can also help them carry this «guilt» to more children. Prepara Familia is fighting in many fronts and their resources are limited. With your support, we can help these brave men and women who chose to dedicate their lives to filling the void, left by a government more concerned with scrounging and robbing the country blind, than with protecting the health of its most vulnerable citizens.

On behalf of these criminals and the innocents they protect, thank you!